The benefits of a Plant based diet in Pregnancy

Home - Uncategorized - The benefits of…

A plant based diet rich in fiber is a common recommendation 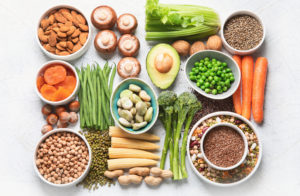 for most people, however, it is even more important during pregnancy as it decreases the risk of preeclampsia (a common complication during pregnancy characterized by high blood pressure), as well as hyperglycaemia and excess weight gain.

The study found that low levels of the short chain fatty acid (SCFA) acetate, produced by microbial fermentation of fiber in the gut, is associated with preeclampsia.
It was also noted that preeclampsic mothers tend to deliver babies with under-developed thymus glands, affecting immune development and potentially leading to higher rates of allergies and autoimmune disease later in life.

Another acid found in the gut, Propionic acid (PPA), commonly used to preserve packaged foods such as processed cheeses and breads has interestingly been found in higher concentrations in autistic children.
When researchers exposed neural cells to excessive levels of externally produced PPA, a reduction in the number of neurons and an over-production in glial cells were observed, disturbing connectivity between neurons and initiating inflammation.

These factors impede the brain’s ability to communicate with the rest of the body, manifesting in behavioural patterns congruent with autism.
Apart from highlighting the deleterious effects of processed foods, this research provides greater insight into the gut-brain axis.

So eat plenty of whole foods and plant foods during pregnancy for optimal health for mother and baby!

Contact us with your enquiry and we will respond very shortly.

Your enquiry was successfully submitted.